Mason River is a community that sits on the border of Clarendon and St. Ann and lies approximately four miles by road northwest of the town of Kellits, Clarendon.

In 1956, it was discovered as Jamaica’s only recorded inland peat bog, a marsh with many interesting and exciting floral species notably plants new to science, carnivorous plants, rare plants, many natives, and endemics.

In 1963, the land was acquired by the government to protect its biodiversity and later designated a Protected Area, a Game Sanctuary, and a Wetland of International Importance (Ramsar Site).

The 202 acres of property is co-managed by the Museum, the Jamaica National Heritage Trust (JNHT) and the National Environment and Planning Agency (NEPA): 36 acres of the land is used as the control area, 44 acres designated an agricultural area and the remaining 122 acres form the reserve. 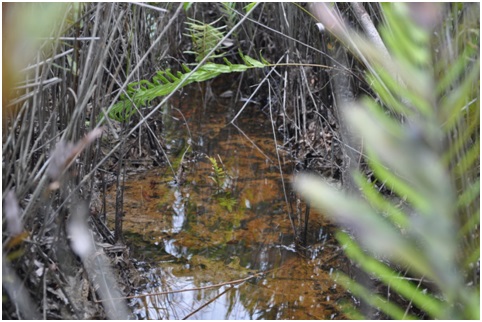 The wetlands also include a marsh, small ponds, and several streams remnants of what was formally the Blue River, also called Mason River. It is from the river from which the name of the community was derived. The Mason River forms an underground watershed into which the streams drain.

Mason River is known for its rich Biodiversity!

431 plant species have been documented at the Mason River Protected Area of which 90% are native and 11% are endemic a few of which are endangered. A diversity of animals also exist such as insects, reptiles, bats, and 54 species of birds.

4 types of carnivorous plants on the reserve both natives are the sundew (Drosera capillaries), and Bladderworts (Utricularia spp ). Seen too are the introduced Venus Fly Trap (Dionaea muscipula) and pitcher plant (Sarracenia rubra).